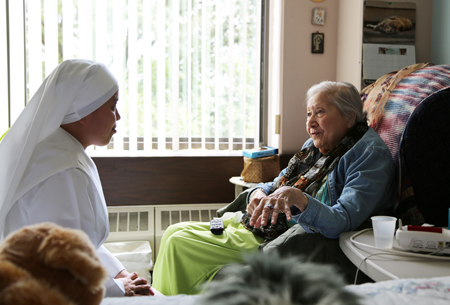 WASHINGTON, D.C. – Moments ago, the Little Sisters of the Poor, a group of Catholic nuns who care for the elderly poor, urged the Supreme Court to protect them from $70 million dollars in government fines for refusing to violate their Catholic faith (watch video). This is the second time the Sisters have been forced to ask the Supreme Court for protection from the government’s efforts to make them to provide contraceptives to their employees. The Supreme Court gave the Sisters preliminary protection in January 2014, and it will hear their case in March of this year.

“The Little Sisters spend their lives taking care of the neediest members of our society —that is work our government should applaud, not punish,” said Mark Rienzi, Senior Counsel of the Becket Fund for Religious Liberty. “The Little Sisters should not have to fight their own government to get an exemption it has already given to thousands of other employers, including big companies like Exxon and Pepsi Cola Bottling Company.”

Today’s brief, which was filed by the Becket Fund along with former Solicitor General Paul Clement, chides the government for its “deceptive labels and diversionary tactics” designed to falsely suggest that the Little Sisters can “opt out” of the mandate.  (See pp. 37-38 explaining how the mandate commandeers the health plans of religious objectors.)

The brief also explains why the government does not need the Little Sisters at all: because it already has many other ways to get contraceptive coverage to those who want it. “Indeed, the government has invested billions of dollars in creating exchanges for the express purpose of making it easy to obtain qualifying insurance when it is not available through an employer.  The government cannot explain why those exchanges suffice to advance its goal of getting contraceptive coverage to the tens of millions of [other] people . . .  yet are not good enough” for the employees of the Little Sisters.

“As Little Sisters of the Poor, we offer the neediest elderly of every race and religion a home where they are welcomed as Christ.  We perform this loving ministry because of our faith and cannot possibly choose between our care for the elderly poor and our faith, and we shouldn’t have to,” said Sr. Loraine Marie Maguire, Mother Provincial of the Little Sisters of the Poor. “All we ask is that our rights not be taken away.  The government exempts large corporations, small businesses, and other religious ministries from what they are imposing on us – we just want to keep serving the elderly poor as we have always done for 175 years. We look forward to the Supreme Court hearing our case, and pray for God’s protection of our ministry.”

“It is ridiculous for the federal government to claim, in this day and age, that it can’t figure out how to distribute contraceptives without involving nuns and their health plans.” said Senior Counsel Mark Rienzi.

The Becket Fund continues to lead the charge against the unconstitutional HHS mandate, winning a landmark victory at the U.S. Supreme Court in Burwell v. Hobby Lobby. It currently represents the Little Sisters of the Poor, Mother Angelica’s Eternal Word Television Network, Houston Baptist and East Texas Baptist Universities, along with many other religious ministries.

For more information or to arrange an interview with a Becket Fund attorney, please contact Melinda Skea at mskea@becketfund.org or 202-349-7224. Interviews can be arranged in English, Chinese, French, German, Portuguese, Russian and Spanish.

The Becket Fund is a non-profit, public-interest law firm dedicated to protecting the free expression of all religious traditions. For over 20 years, it has defended clients of all faiths, including Buddhists, Christians, Jews, Hindus, Muslims, Native Americans, Sikhs, and Zoroastrians. Its recent cases include three major Supreme Court victories: the landmark ruling in Burwell v. Hobby Lobby, and the 9-0 rulings in Holt v. Hobbs and Hosanna-Tabor v. EEOC, the latter of which The Wall Street Journal called one of “the most important religious liberty cases in a half century.”

Leaders of many faiths ask Supreme Court to protect the Little Sisters of the Poor.